We have a rather large and complex thesis, but broadly speaking we believe that blockchain technologies enable a transformation of the Internet, the Economy and Society. We believe that we are in the early days of this transformation. Imagine that we are in the year 1989 before the Hypertext Transfer Protocol (http) was introduced by Tim Berners-Lee. So we have TCP/IP and FTP and some of the extremely basic protocols that define the Internet.

We believe that the Internet of Value is being created, and that we are in the early part of this.

Because we believe we are early, we are focusing our investments on early segments such as infrastructure platforms, novel consensus algorithms, developer platforms, middleware protocols, compute resource sharing, programming models and frameworks, ecosystems components such as exchanges and wallets. These are all relatively low level components and horizontal (industry neutral). We believe that primitive applications in certain vertical industries, namely financial services and gaming will also be feasible. 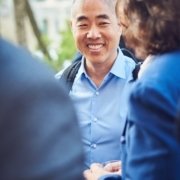 Investment Criteria: are you a fit for gumi Cryptos? Getting your startup funded by gumi Cryptos Durable Conviction: How do I Convince a VC to Invest in my Startup?